The Emma Project - Helping To Get Music into PS 230 in Brooklyn, NY

Do you ever wonder if small things really make a difference?   This past fall, I asked some fellow children's musicians to do something that would make a HUGE difference in the lives of many, many children in one elementary school in Brooklyn, NY.


Soon after the start of the school year, I was having a conversation with Emma about her new first grade class.  I asked the usual questions, "Do you like your new teacher? Who are some of your new friends this year?," and "Do you like your music class?"
"No," she said, casually.  "We don't have music this year."
Shock and panic.
"Are you sure, Honey?" "Maybe you just haven't started it yet?" I said, hopefully.
"No," she said.  "My teacher said we only have art.  No music and no dance this year."
She was right.  Soon after this conversation,  I got an email from the PS 230 PTA saying that they have had enormous budget cuts to their programs in the amount of $500, 000.  FIVE HUNDRED THOUSAND DOLLARS!
I started to plan out how I could get into the school and play music for them as much as possible, and thought that if they could just play my CD's during school hours, the kids could at least get up and move for a few minutes during the day.  I could also use some music from my previous band, Imagination Workshop Band.  Then I had an idea.  I would see if I could get some of my fellow kids' musicians to donate a song and I would make a mix CD for Emma's teacher that she could share with the rest of the first grade classes. I asked Dave what he thought?  He thought it was a good idea, and hey, what did we have to lose?
So I went on Sprockster and sent a message out to everyone on my friend list which basically told them that my daughter Emma's school had huge budget cuts, no music, no dance, and would they please donate a song for a mix CD?   I also reached out to a few personal friends via email.  I was hoping for about 10 people to donate a song or two.
About 30 minutes later, I got my first response from my friend Mike Messer of The Dirty Sock Funtime Band.
"Hey Suzi! Hows it going? We'd love to contribute to the CD, we have a bunch of dance songs, we'll send them all to you... I just wanna talk with the band and see which songs would be best. Talk to you soon!"  Peace, Love and Music, Mike Messer and the Dirty Sock Funtime Band
I was so happy.  I yelled to Dave from my computer that I got my first response already, and it was from one of Emma's favorite bands.  She would be so excited.
Then, I got a similar message from three other artists in a row.  Then I got about 10 more, and my blackberry kept making that weird buzzing noise the whole night, and every single day for about a month I got more and more responses and songs coming in for Emma's school that my mix CD turned into a 4 disc box set with over 79 submissions!  Amazing.  I could barely keep track of them all.  In addition to the songs, I was connecting with so many people who were sympathetic to our situation and incredibly supportive of the project.   I loved it.

I recruited both Emma and Sebastian to help me weed through all of the songs, and we chose at least one song from each artist.  It wasn't easy, there were so many great choices!  We then arranged the songs according to style on 4 separate discs so that the teachers would have an easier time selecting.  This process took quite a while.  The kids loved hearing all of the songs, and so did I.  It was a pretty awesome day. 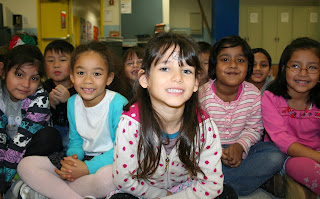 Emma would periodically ask, "They gave these songs to me, Mama?"

"Yes, Emma, they did.  They gave them to you and all of your friends at school."

I had also received an email from Jon Samson at CoCreative Music donating a few of his songs and offering his engineering services to normalize all of the songs so that they are all heard at a similar volume.  I told him there were over 70 songs... did he realize what he was getting into?  Nevertheless, he agreed.  We are still in the process of doing this and it is a real treat to work with him.   Jon told me in an email,  "These are also the most terrific kids songs I've heard!"
I totally agree.

I had hoped to present the CD package by Thanksgiving, but due to some time restraints, I have decided to wait until this month.  I can't wait until this project, which I fondly call "The Emma Project" can be officially presented to her class.  What better time then this holiday season?
I am truly humbled by this outpouring of support and generosity, and look forward to hearing feedback from the students and teachers of Emma's school once these amazing songs start circulating around the classrooms.
To my fellow musicians, I thank you.  By doing something small and donating just a single song, you have given us over 3.4 hours of music for these kids to sing and dance their hearts out in the New Year!
I wanted to share the list of all of the artists (in alphabetical order) who donated to this project, along with links to their websites.  Please check them out, and help support their awesome music for kids (and grownups) as we are.  Happy Holidays!
Love,
Suzi ;)